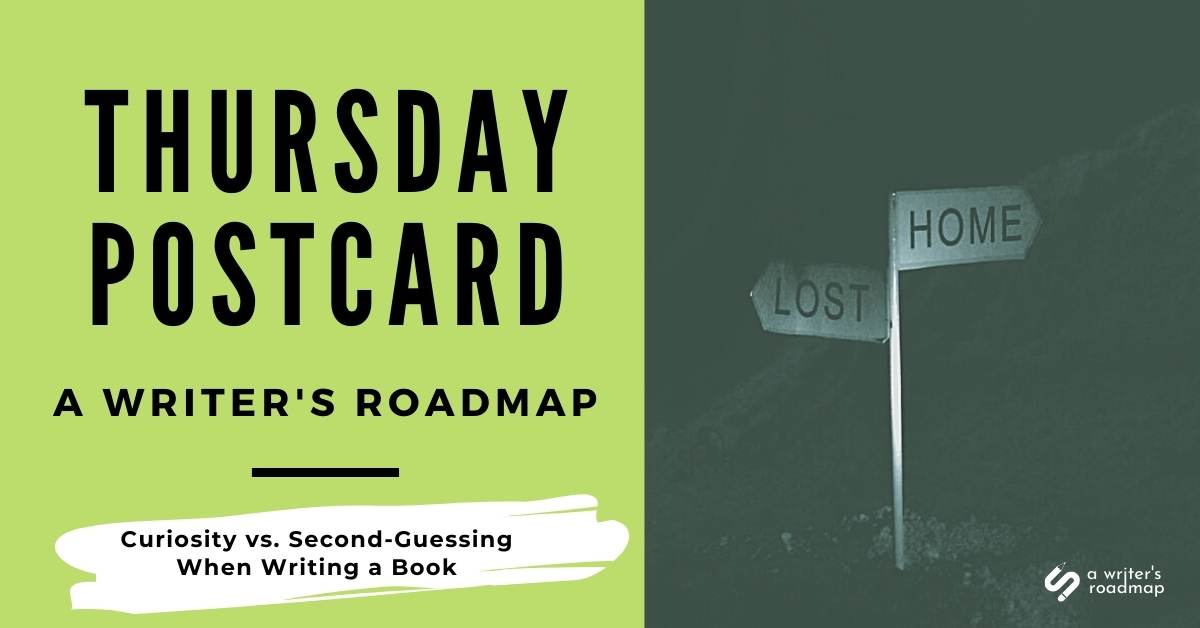 When you’re writing–a story, an essay, a book–it is easy to get partway in, then start second-guessing.

Second-guessing can look like, “This is awful. I should write something else.” Or “My novel’s antagonist CAN’T be the patriarchy…maybe I should make it a mystery instead!” Or “This book should be about reducing stress, not managing it.” Or “Maybe there are too many memoirs about trauma. Why write another one?”

When second-guessing, you are asking “did I take the wrong path?” You’re looking back over what you’ve done and thinking about what you might have done instead, or what you could still do if you backtracked.

Having second-guessed my way through six  novels of varying badness, only one of them published (and that was by accident), I can tell you there’s a better way: curiosity.

Curiosity is asking “what is here?”

It’s about what’s right in front of you now.

Writing a book can be complicated. It’s an iterative process for most writers I know. We don’t just spray a gorgeous draft from our foreheads onto the page, UNFORTUNATELY. We have to work at it from a few different angles. When you’re working angles, it is natural to wonder if there’s a better way.

There is no point in backtracking to the last fork in the road, or to the beginning of your path with this book or essay, because there will always be forks. You’ll end up having to make decisions all over again, and you have no idea whether they’ll be better than the decisions that got you where you are now, whether it’s the second page of a short story or the 12th draft of a thesis on otter violence.

It’s kind of like wondering if you did the right thing putting your dog in training school, or forcing your daughter to attend Kindergarten. It happened, so we’ll never know what the other way could have looked like, and worrying about it is an energy suck that could stop you from being in the moment the way you need to be in order to write a book.

The great thing about curiosity is that it is free of hope. There’s no agenda, no “Jesus, how did I get here?!” You are getting the lay of the land. You’re letting go of the past. Take a breath and look around. That is curiosity.

The first two attempts gave me about 25,000 words each time, both forming a stiff and uninteresting opening. Reading it was like eating cold porridge when you’re already full. That’s my professional assessment. The sentences were great, don’t get me wrong, but there was no life underneath them.

This third time, I gave up hope that it would be anything at all, and just started putting one foot in front of the other. Write a bunch of words, write a bunch more the next day. That’s my usual process, so there’s nothing new there.

It was better than the last two times, though. One of the many great things about editing books for a living is that if you do it long enough, you absorb what works and what doesn’t work at a cellular level. There was progress.

But I really wanted to not spin my wheels and take forever to write a novel (again), so I kept trying to think big-picture. By that, I mean, what’s it mean? What’s the actual story? What’s the (gasp) character arc?

I came up with interim answers as I wrote, trying not to take it too seriously or turn it into cold porridge. I got to about 30,000 words, then I realized I was kind of lost. In the past, my process has been to burn through a first draft without looking back. This time, I got curious.

I stopped the focused daily writing, looked around at where I was, and took stock by going through the ideas I’d had so far . I kept writing, but it was random stuff, some related to the novel and some not. My main interest was reorienting myself and seeing where I was, by doing a little thinking and a little freewriting about the characters and the story and the plot. I did not hope for anything. I wanted to learn.

I’m an index carder and sporadic printer-outer, so I used my writing time for a few days to get away from the screen and look through what I had. This is when I realized that the writing was iterative. I’d been working the same ground. In the eight weeks of writing, the book’s landscape had become a tighter, better, more honed version of the ideas, characters, and plot I’d started with. Not just this start, but the cold-porridge ones as well.

I’d been lambasting myself for not writing efficiently, but this inefficiency was actually me describing the land The Viragint occupies to myself.

The weird thing is, the curiosity led me to a breakthrough of mammoth proportions, something I’ve never experienced before.

Earlier this week, I used my writing time to do a Table of Contents. I’ve never done one of those for a novel. I just number chapters and work my way through from scene 1 to the end, then group the scenes into chapters.

But WTF! The TOC came out like it had been waiting for me, lurking behind a tree. It put all the thinking and writing and meaning-making I’d done so far into five parts, 28 chapters, each moving the story, each touching on character arc, each getting to the core of The Viragint’s soul. I just about fell off my chair.

So if you’re second-guessing, try taking a step back, forgetting about productivity and all the stuff writing books (and editors!) tell you matters, and get curious about where you are.