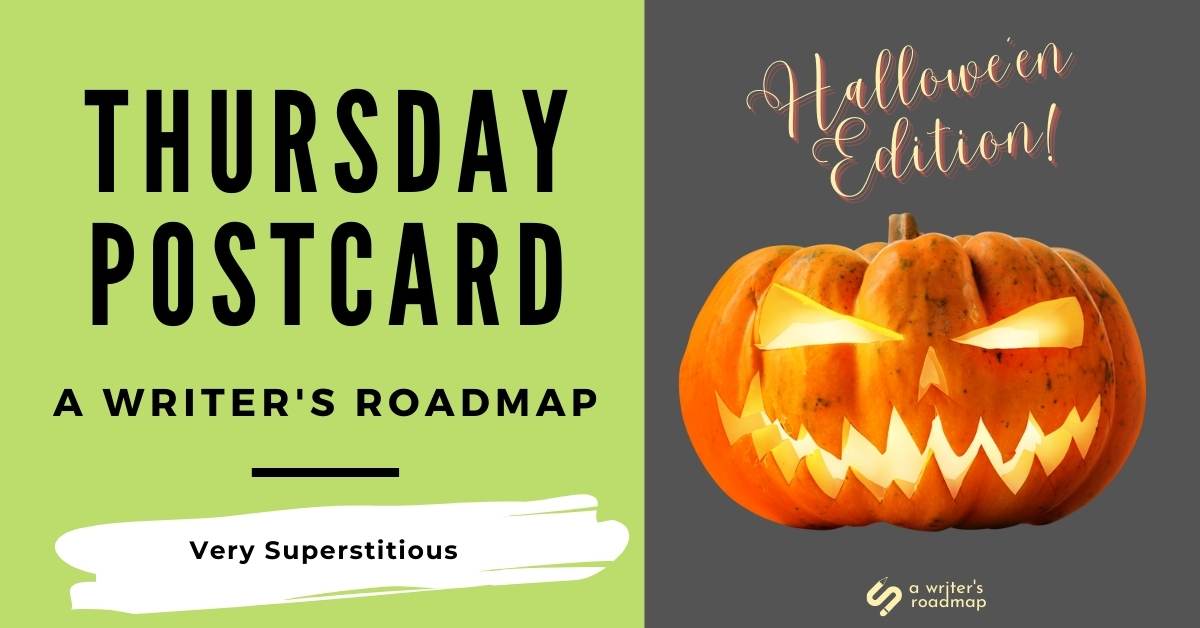 What an elegant description of superstition: believing in things that you don’t understand.

Yet what are we humans to do? I would say there’s an awful lot we don’t understand, including ourselves.

One of the main things writing projects do is help writers explore something we’ve been wondering about, like estrangement or ambition or duty.

There’s no final answer to exploration. Not if the question is big enough. You’re just working your way through the territory by  dint of writing a story or a memoir or a nonfiction book.

There might be easier ways to explore a personal territory than through an art like writing…but are there any more effective?

Sometimes that territory is so deeply buried it makes one scared to dig too deep.

American writer Truman Capote refused to begin or end a piece of writing on a Friday.

British writer Charlie Connelly doesn’t like saying the titles of his books. He says, “I’ll do anything to avoid it, referring to them by their subject matter or just as “that book.””

Maya Angelou writes in hotels or rented rooms and keeps “a dictionary, a Bible, a deck of cards and a bottle of sherry in the room.”

Vladimir Nabokov pooh-poohed linear creation: “I do not begin my novel at the beginning, I do not reach chapter three before I reach chapter four, I do not go dutifully from one page to the next, in consecutive order; no, I pick out a bit here and a bit there, till I have filled all the gaps on paper. This is why I like writing my stories and novels on index cards, numbering them later when the whole set is complete.”

I’d say those last two verge toward approaches, rather than superstitions.

Maybe there’s no clear demarcation. Maybe superstitions are one end of the spectrum, a seemingly irrational rule around an activity. Or maybe a rule whose foundations are buried deep.

I’ve been writing very slowly on a project and have no idea why. Sure, I’m busy. Who isn’t? But the slowness is about something else.

Maybe I’m getting close to something scary. In the book Living Untethered, Michael Singer writes (I’m paraphrasing) that our subconscious holds the experiences, thoughts and feelings we’ve pushed down, the things we haven’t let flow through us.

When we sleep, our subconscious gets to express those things. And it’s so clever that when even our sleeping selves can’t handle those suppressed experiences, it dreams in metaphors.

Last night I dreamed about masses of starlings and about being somewhere far north, like the Orkneys, off the northeastern coast of Scotland.

In dream imagery dictionaries (yes, those exist!) birds mean something.

The meaning of dreaming of the Orkney Islands was a little harder to track down, so in lieu of, here is poet Michelle O’Sullivan reading her poem, “Dreaming of Orkney”

The opposite of superstition is…

Writing! (or any art)

Because it helps us explore.

As philosopher Alfred Korzybski wrote, “The map is not the territory.”

“Korzybski was the originator of general semantics, a system of linguistic philosophy that attempts to increase humanity’s capacity to transmit ideas from generation to generation (what Korzybski called man’s “time-binding capacity”) through the study and refinement of ways of using and reacting to language.”

[This idea is exposed both literally and figuratively in a ridiculously interesting article by lawyer Miles B Cooper from Plaintiff Magazine.]

Yes. Writing as the opposite of superstition, and writing processes that seem rooted in superstitions.

You might have noticed that even the writers above, with  serious peculiarities around their writing, have nonetheless made it through book after book and brought art to the world.

It’s not the superstitions around writing that need looked at. Those don’t stop us from writing. My experience is that writers often examine their own thinking about getting the words out. Sometimes what seems like a superstition is just a way of giving ourselves some leeway.

As Truman Capote was overheard to say, “It’s Friday, no way can I start that book.” That night, he dreamed about a bloodbath. The next day he started writing the blockbuster In Cold Blood.

As Stevie Wonder said, “It is always great when we don’t allow fear to put our dreams to sleep.”

Wishing you a Happy Hallowe’en!

Cheers,
Pat
p.s. Hallowe’en has always been my favorite holiday, so imagine my great joy when someone who quickly became one of my favorite people in the world was born on October 31. Happy Birthday, LB!